Recently, I had the pleasure of sitting down with one of our awesome customers. I really wanted to get some genuine answers from someone who not only went through our installation process but, who had contemplated going with another company.

Sheila & Geoffrey Bleakney have around 1,400 sqft of synthetic turf in their backyard. Sheila had a vision and was not going to sacrifice anything. They live in a very quiet and personable neighborhood in Snohomish, WA. Sheila was kind enough to answer some questions I had. 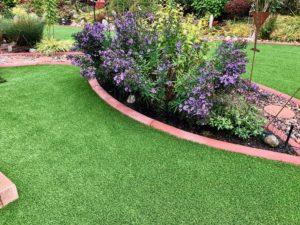 What did you have down in your backyard prior to synthetic turf?

“Grass; I love spending time in the yard, but I don’t like doing something and never having it look right.”

They are located in an area that has tall trees making it hard for sunlight to get through. This caused problems with the grass dying and/or not being able to grow properly. They knew this was what they wanted in their backyard after first seeing it at the Home and Garden Show.

As with all of our customers, we encourage them to do their research before hand. Seek out local synthetic turf companies and get as much info as you can before making an informed decision. When The Bleakney’s were in the market for turf, they contacted several companies for estimates 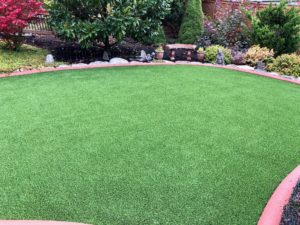 What made them ultimately decide to go with us?

“So,  I got the two quotes. When Mike came out it was really clear that he knew what he was talking about. I have done a lot of research as to how it’s laid, plus I had talked with Glenn, the original owner of the company, and he had explained a whole lot of stuff to me. So, I had a pretty good idea of what was done. So, when Mike came out and showed me and told me what he was going to do and then, he(Mike) was the one who recommended the curbing; cause he said there is two different ways to do it. So when the other guy came out, he was real young- which is fine, I have no problem with that whatsoever, but I asked him, ‘So what do you do around the edges.’ He said, ‘Oh, you don’t have to do anything.’ I said, ‘What do you mean you don’t have to do anything?’ He replied, ‘You just cut it off and it will be fine.’ ‘How is that going to look against the dirt?’ I asked.  He said, ‘it looks great and you will like it. ‘ ”

Sheila continued, “The competitor’s bid was $3,000 less than yours so I knew I could have gone with it, but I am also a firm believer of you get what you pay for. Plus, I knew your company would stand by if there is any issue and I wasn’t so sure about this other company.”

One of her main concerns with our competitor is that she felt like he didn’t know what he was talking about. She knew right then that Synthetic Turf Northwest was her choice. Sheila and Geoffrey had been saving for turf for around 5 years. They wanted to make sure that the company they picked was trustworthy, extremely reliable and would completely fulfill their synthetic turf dreams.

After having their dream backyard for just over 6 months, I was curious how they felt about their investment and if, given what they know now, would they continue with having it installed?

“Oh, absolutely!” My husband and I laugh about it cause we are like, yeah- it is the best thing we have done to our yard. And I have to tell you that my husband is hilarious. We are driving along and he will go, ‘OH! What is that machine?’ I say, ‘oh, you mean that lawn mower?’ ”

How has installing synthetic turf changed the way you think about your space?

“It makes everything else look lusher and greener. It’s just so pretty cause now we have the bright green and it’s just- incredible.”

Living in the Pacific Northwest, there are only so many days that we can utilize our outdoor spaces, as it rains most of the year. The Bleakney’s have a large covered patio area that overlooks their serene backyard. Humming bird feeders, hidden stepping stones and statues can be found placed strategically throughout. Outlining the turf, is gorgeous rustic red cement curbing that creates a visually appealing path to follow. To help minimize the overall cost of the turf, Sheila came up with the idea of creating an island with bushes, plants and bark, in the middle of the turf. This reduced the overall square footage, but adds so much more to the depth of the yard.

When the weather is nice, Sheila & Geoffrey love to entertain. Sheila is also an avid gardener. They even sit out in the back under the cover when it’s raining. Their backyard space is really one of a kind and a sight to see. Synthetic Turf has not only added value to their home, reduced overall costs of maintenance with real grass, but their entertaining/living space has now expanded.

Why Synthetic Turf is Becoming More Popular in Commercial Landscaping

Hire a Professional for Synthetic Turf Installation: Why It’s Worth the Wait

Maintenance Tips for Your Synthetic Turf

How Much Does a Backyard Putting Green Cost